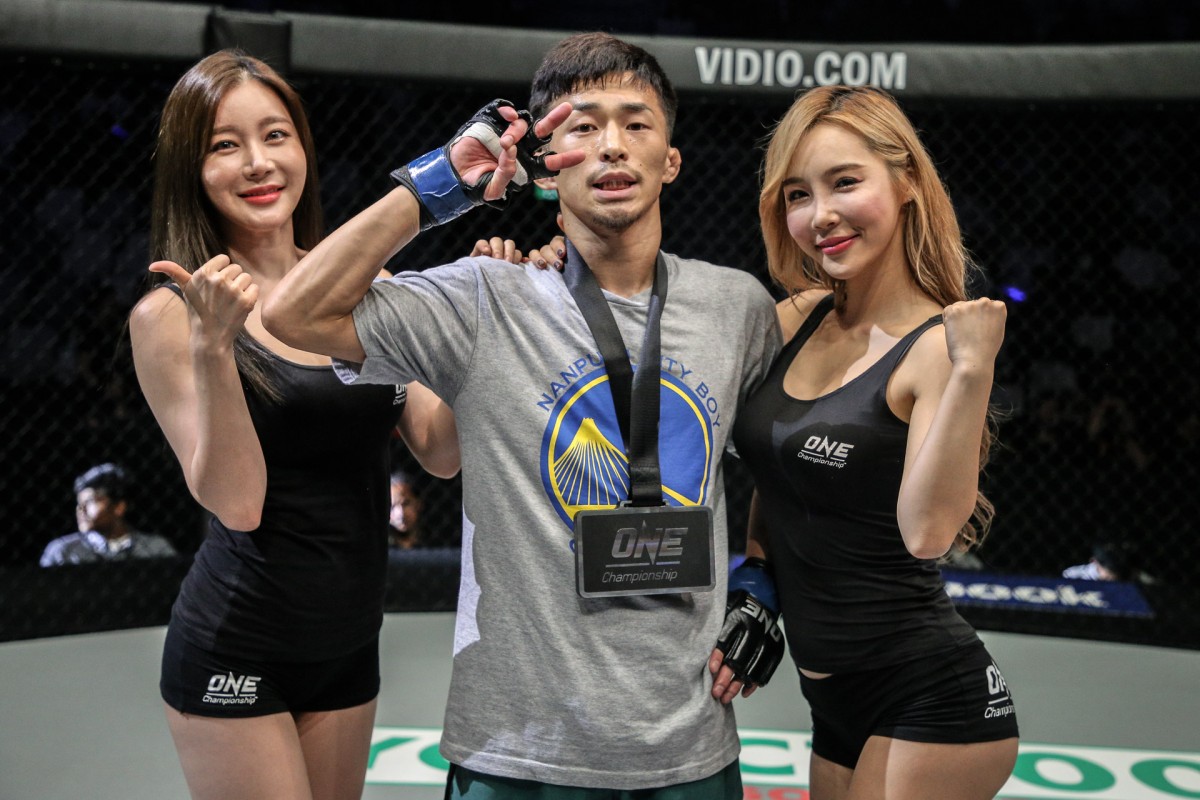 Tatsumitsu Wada locks in a deep rear naked choke to force the tap from Eugene Toquero at 0:52 of Round 1!

Tatsumitsu Wada locks in a deep rear naked choke to force the tap from Eugene Toquero at 0:52 of Round 1! Watch the full event LIVE & FREE on the ONE Super App 👉http://bit.ly/ONESuperApp | TV: Check local listings for global broadcast 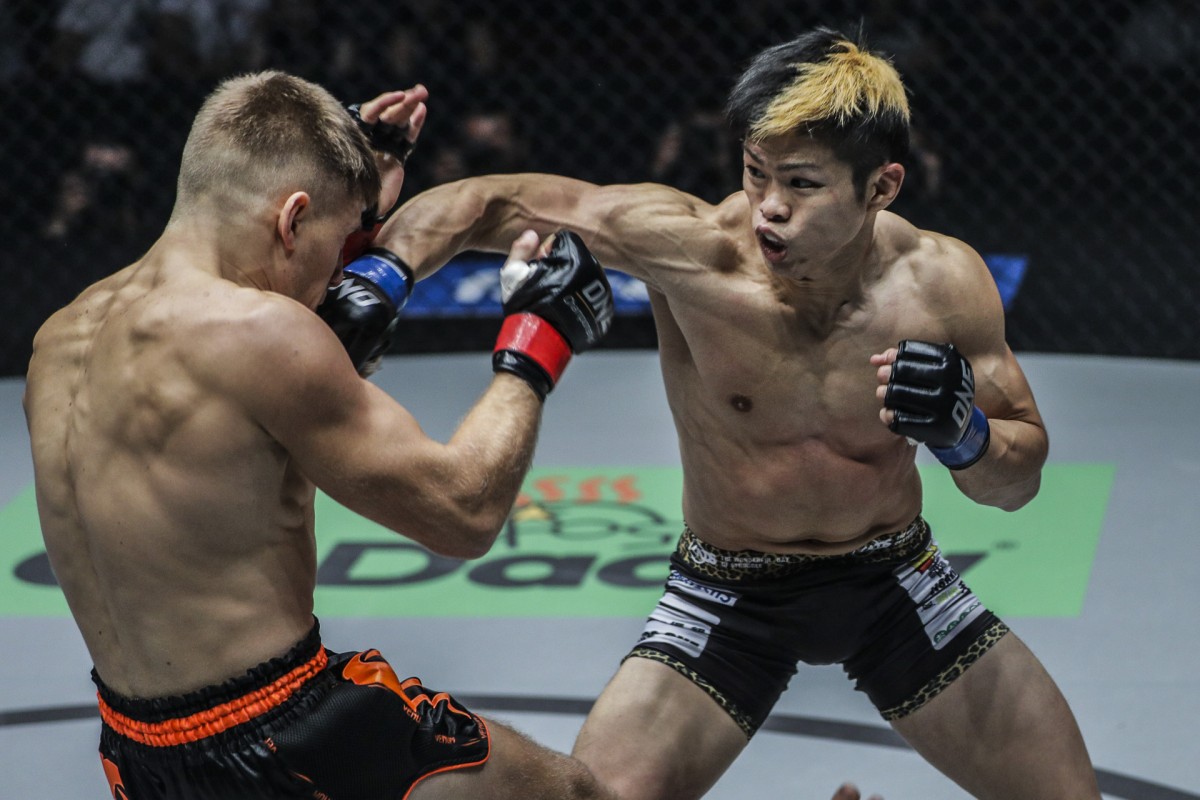 Malaysian Muay Thai superstar Mohammed Bin Mahmoud brings the house down with a sensational knockout of Stergos Mikkios at 2:20 of Round 1!

Malaysian Muay Thai superstar Mohammed Bin Mahmoud brings the house down with a sensational knockout of Stergos Mikkios at 2:20 of Round 1!Watch the full event LIVE & FREE on the ONE Super App 👉 http://bit.ly/ONESuperApp | TV: Check local listings for global broadcast. 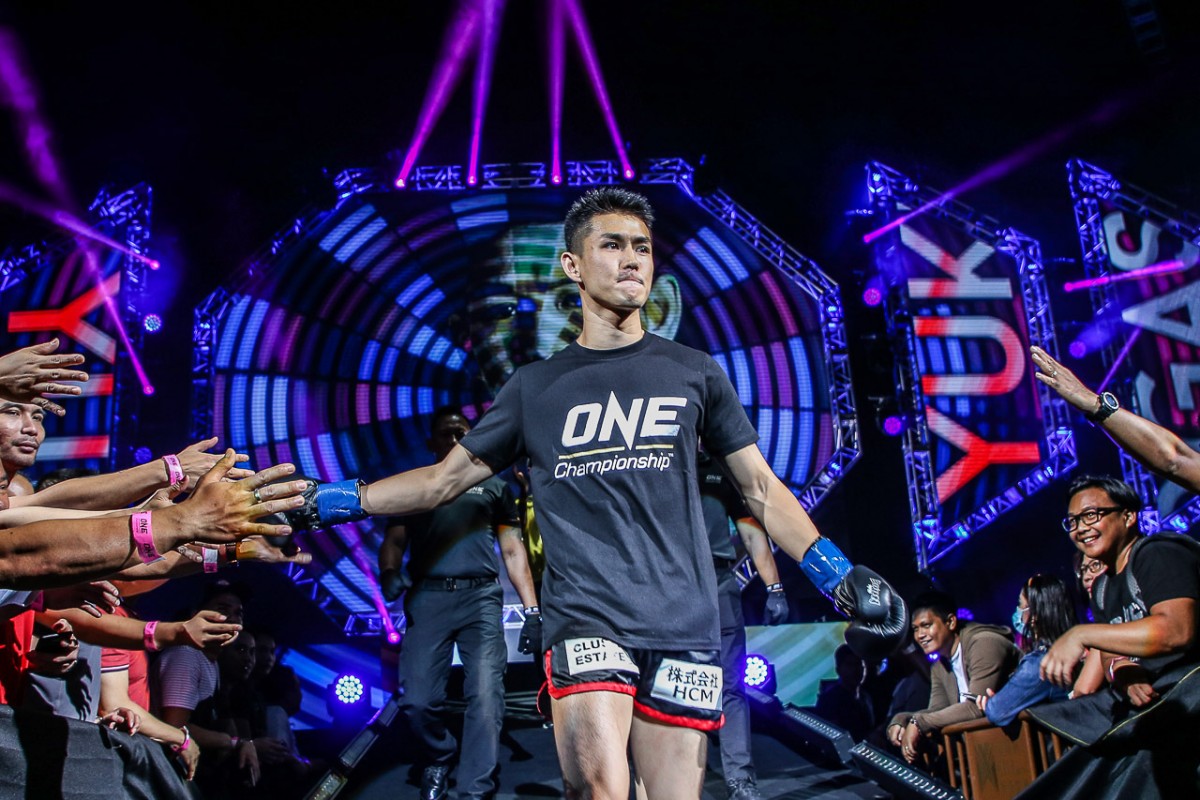 【プレスリリース】
INITIAL BOUTS ANNOUNCED FOR ONE: HERO’S ASCENT ON 25 JANUARY IN MANILA
GEJE EUSTAQUIO TO DEFEND ONE FLYWEIGHT WORLD TITLE AGAINST ADRIANO MORAES 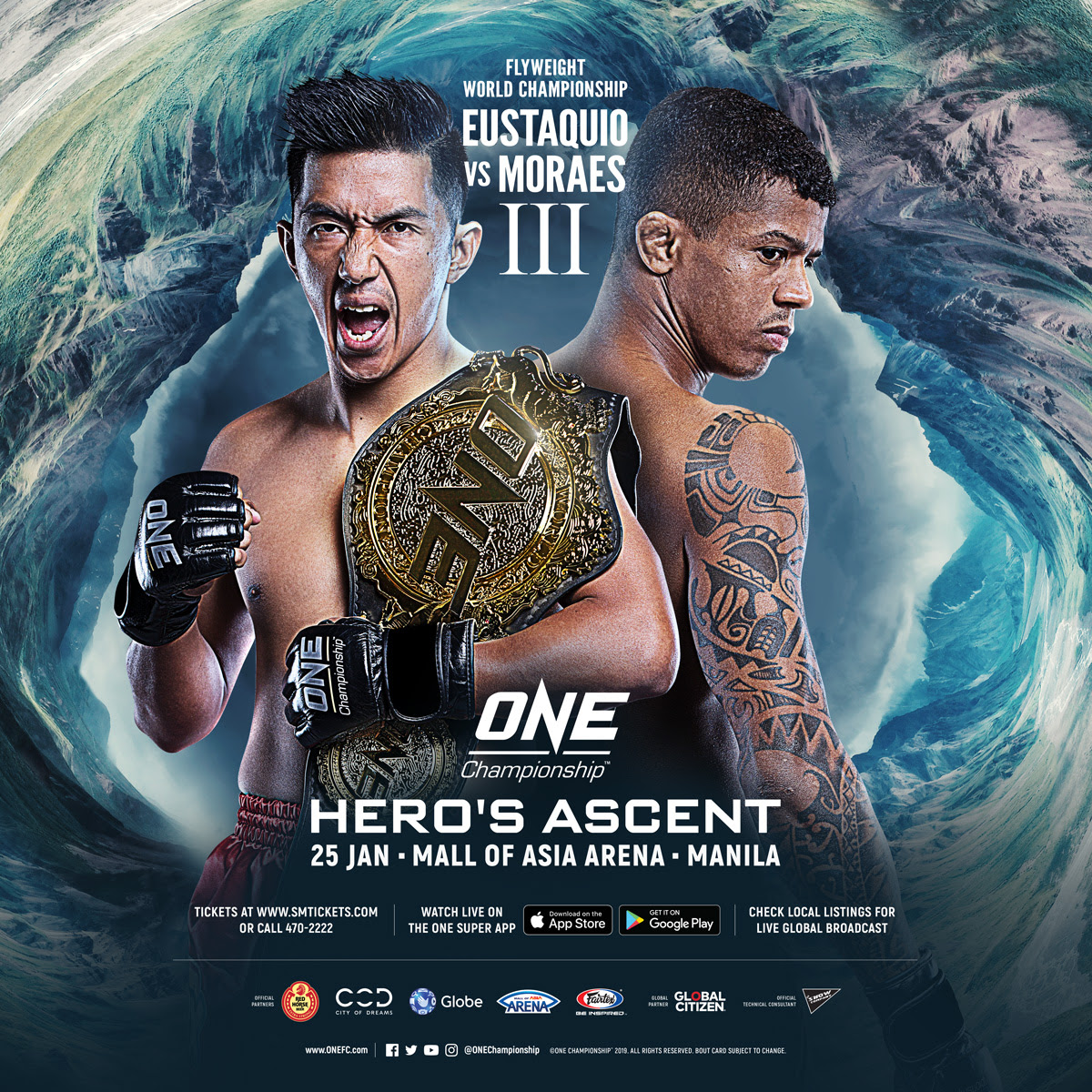 3 January 2019 – Manila, Philippines: The largest global sports media property in Asian history, ONE Championship™ (ONE), has just announced the initial bouts for ONE: HERO’S ASCENT, which is set for the Mall of Asia Arena in Manila on 25 January. Once again, the absolute best in local and international martial arts talent is set to showcase their skills in the ONE Championship cage. In the main event, reigning ONE Flyweight World Champion Geje “Gravity” Eustaquio of the Philippines will defend his title against Adriano “Mikinho” Moraes of Brazil in a historic trilogy bout.

Ticket information for ONE: HERO’S ASCENT is available at www.onefc.com.

Eustaquio then worked his way back up the ranks in order to secure a rematch with the Brazilian four years later. He picked up the ONE Interim Flyweight World Title with a victory over Kairat Akhmetov in January 2018, which set up the title unification bout with Moraes.

In the highly-anticipated rematch, Eustaquio and Moraes figured in a tremendous five-round battle, but it was “Gravity” who claimed a split decision victory and the undisputed championship. Now, they face off one more time in a rubber match to determine the rightful owner of the ONE Flyweight World Title.

In the quarter-final of the ONE Lightweight World Grand Prix, Team Lakay veteran Honorio “The Rock” Banario of the Philippines will face undefeated lightweight Lowen Tynanes of Hawaii, USA.

Banario, a former ONE Featherweight World Champion, has experienced a career resurgence ever since moving up to the lightweight division. “The Rock” has won six of his last seven bouts, and he is considered one of the top competitors in the weight class.

Tynanes is a former KOTC Light Welterweight Champion and is a Hawaii state champion wrestler. He owns victories over some of the lightweight division’s best including Rasul Yakhyaev, Koji Ando, and even current ONE Lightweight World Champion Eduard “Landslide” Folayang. Now, following a nearly three-year break, the American is ready to resume his career.

Team Lakay prodigy Danny “The King” Kingad of Baguio City, Philippines will be taking on Japanese veteran Tatsumitsu “The Sweeper” Wada in a showdown between top flyweight contenders.

Since dropping a first-round submission to Moraes in November 2017, Kingad has stormed back into title contention. He went 3-0 in 2018 and looks to make a statement in the new year with another solid win.

Wada, on the other hand, made his ONE Championship debut last July, falling to Reece McLaren via split decision. He bounced back months later to defeat Eugene Toquero via first-round rear-naked choke.

Rising Muay Thai superstar Rodtang “Iron Man” Jitmuangnon of Thailand is scheduled to return to ONE Super Series in a Muay Thai match-up against Fahdi Khaled of Tunisia. The striking spectacle will feature both martial artists donning 4-ounce grappling gloves.

Rodtang, a two-time Omnoi Stadium Muay Thai World Champion, made a successful ONE Super Series debut in September when he overpowered Sergio Wielzen to claim a thrilling unanimous decision.

Meanwhile, Khaled, who trains at Venum Training Camp in Thailand, is an accomplished kickboxer ready to make his ONE Championship debut against one of the hottest superstars in Muay Thai today.

In another ONE Super Series match-up at ONE: HERO’S ASCENT, Brown Pinas of Holland looks to build on his scintillating knockout performance last November by taking on Thailand’s Bangpleenoi Petchyindee Academy.

Pinas knocked out Yohann Fairtex Drai with a beautiful spinning back elbow at ONE: WARRIOR’S DREAM, and announced his arrival to the global stage of martial arts with his first promotional victory.

Bangpleenoi, who aims to impress in his ONE Super Series debut, will look to put his Muay Thai experience on display and stop Pinas in his tracks.

Elias Mahmoudi of France will make his ONE Super Series debut against Japan’s Yukinori Ogasawara.

Mahmoudi is one of the fastest rising talents in Muay Thai. He is a WPMF World Champion, whereas Ogasawara is a WBC Japan Super Bantamweight Muay Thai Champion. The two talented strikers aim to put on a show at the Mall of Asia Arena with the entire world watching.

Lee is a NAGA No-Gi Grappling Champion who first began his martial arts journey by training in taekwondo. After experiencing success in the discipline, however, he shifted his focus to the grappling arts and began training at Eddie Bravo’s 10th Planet Jiu-Jitsu.

The well-rounded mixed martial artist wants to prove to the world that he belongs with the best in his new weight class, but Tang stands in his way. Tang, who trains out of Dragon Warrior in Shanghai, wants to spoil Lee’s second featherweight outing and claim victory for himself in his grand premiere.

Suzuki joined ONE Super Series first, defeating Deividas “The Lithuanian Savage” Danyla in a three-round thriller at ONE: CONQUEST OF CHAMPIONS last November. On the other hand, “Jordan Boy” electrified his hometown of Kuala Lumpur last December when he finished Stergos “Greek Dynamite” Mikkios via stunning first-round knockout.

Kicking off the action in the preliminary bouts at ONE: HERO’S ASCENT are strawweights Egi Rozten of Indonesia and Himanshu Kaushik of India.

Rozten is currently riding a two-bout win streak, with both victories coming by way of knockout. The Indonesian regional boxing champion has made his power known as of late, showcasing his incredible hands to the delight of his hometown crowd.

Kaushik will be looking to use Rozten as a springboard, however. The seven-time Indian Wushu Champion wants to prove he is a top contender, and he can accomplish that by defeating the Indonesian.