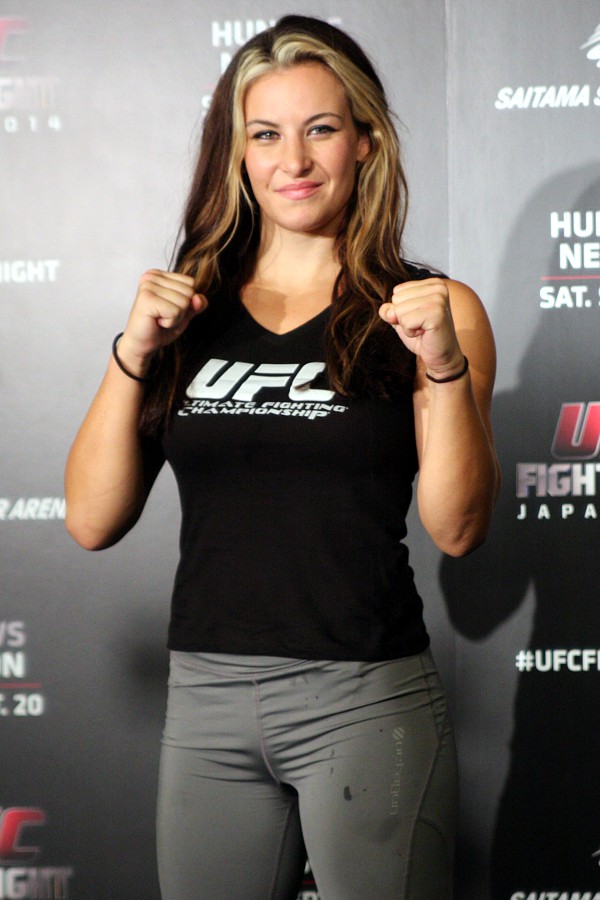 MIESHA TATE APPOINTED AS VICE PRESIDENT OF ONE CHAMPIONSHIP

08 November 2018 – Singapore: The largest global sports media property in Asian history, ONE Championship™ (ONE), has just announced that it has appointed former women’s mixed martial arts world champion Miesha Tate as Vice President of ONE Championship.

Chatri Sityodtong, Chairman and CEO of ONE Championship, stated: “It is both an honor and a privilege to announce that women’s mixed martial arts world champion Miesha Tate will be joining ONE Championship as Vice President. Miesha has been an incredible pioneer for the sport, and has been an inspiration for many young men and women. What impresses me most about Miesha is her humility, compassion, honor, and respect. Throughout her career, Miesha has always exemplified the deep-rooted martial arts values of integrity, humility, honor, respect, courage, discipline, and compassion. Not only is she a good friend, but I am proud to have her represent ONE Championship on a global scale. I look forward to welcoming Miesha to her new home in Singapore!”

Miesha Tate, Vice President of ONE Championship, stated: “I am thrilled to join ONE Championship as a Vice President. I truly believe in its mission of unleashing real-life superheroes who ignite the world with hope, strength, dreams, and inspiration. I’m honored to bring my experience as a World Champion and to help inspire the next generation of athletes. And of course, I am excited to relocate to my new home, Singapore, and travel throughout Asia!”

In Partnership with Dentsu, Razer, and Singtel Group

ONE Championship intends to lead a plan to invest up to US$50 million alongside other key partners into ONE eSports to create Asia’s largest global eSports Championship Series; ONE eSports will feature multiple blockbuster game titles across Asia and hold a number of eSports events held alongside ONE Championship martial arts events in 2019. Earlier this year, ONE Championship announced a 30 event schedule for 2019 for its global scale martial arts events across iconic Asian cities including Singapore, Bangkok, Tokyo, Seoul, Jakarta, Shanghai, Beijing, Manila, Kuala Lumpur, Ho Chi Minh City, and many other cities. ONE eSports will piggyback off this master event schedule in select cities. In addition, ONE eSports will also produce and broadcast dedicated eSports content in the form of live event broadcasts, documentaries, reality shows, weekly magazine shows, highlights, video blogs, and other unique content across its global media broadcast platform in 138 countries. Also, recently-signed ONE Championship athlete and pound-for-pound mixed martial arts king Demetrious “Mighty Mouse” Johnson will help to lead the ONE eSports efforts as its Chief Brand Ambassador; he is a lifelong gamer and well-known Twitch streamer with a rabid following.

Chatri Sityodtong, Chairman and CEO of ONE Championship, stated: “It is with great excitement that I announce ONE eSports, Asia’s largest global eSports Championship Series. We see a natural crossover between martial arts and gaming fans in Asia and an opportunity to bring them together under Asia’s home of millennial live sports. ONE Championship is committed to bringing its same brand of large-scale event production and live broadcast capabilities, unique world-class content production, global media distribution, storytelling expertise, and marketing experience to ONE eSports. Our mission is to celebrate Asia’s eSports heroes on the global stage. The establishment of ONE eSports transforms ONE Championship into Asia’s largest producer of millennial sports content.”

While ONE eSports will showcase blockbuster game titles from around the world, Dentsu is the dedicated marketing partner of the Japan eSports Union (JeSU) and will be responsible for harvesting Japanese game developers’ desire to expand in eSports across Asia via ONE eSports. Dentsu will also help to lead ONE eSports’ efforts to hold events across Japan. In addition, ONE eSports will also leverage Dentsu and Dentsu Aegis as its preferred marketing agencies for strategic marketing formulation and sponsorships around the world.

Shuntaro Tanaka, Director, Content Business Design Center of Dentsu, stated: “We are pleased to announce this partnership with ONE Championship as we look to further develop the rapidly growing eSports industry in Japan and the rest of Asia. We recognize good synergy between martial arts and eSports, making this a fantastic opportunity for both ONE Championship and Dentsu to participate in this growing segment in Asia, as well as leverage multiple content platforms for additional sales and business opportunities. ONE Championship has been a terrific partner and Dentsu is happy to move forward with ONE in this eSports venture.”

ONE eSports will also work with Razer, the world’s leading lifestyle brand for gamers, to leverage its ecosystem of hardware, software, and services in the following manner:

– Razer will provide its expertise and leadership as a pioneer in the eSports industry to develop, manage, and organize an eSports tournament or series in partnership with ONE eSports.
– eSports Mogul, a Razer portfolio company, will provide the technical know-how and innovation for the development of an online platform to organize, manage, and stage online eSports events and tournaments.
– Razer Pay will serve as the payment platform for the ticketing of ONE eSports tournaments, as well as for the online sale of related merchandise and content.
– ONE eSports and Razer will explore joint marketing opportunities using Team Razer eSports athletes as well as ONE Championship athletes to drive communication and engagement to all martial arts fans and gamers across Asia.

Min-Liang Tan, Co-Founder and CEO of Razer, stated: “Like Razer, ONE Championship is at the forefront of a new digital entertainment revolution that delivers the sporting content that millennials hunger for, whether online or offline. This partnership will see us combining our respective areas of expertise and deliver unmatched cross-boundary experiences to our fans.”

ONE eSports will also explore working with the Singtel Group, Asia’s leading communications technology group with a combined mobile customer base of over 700 million. The collaboration across Singapore, Australia, Indonesia, Thailand, Philippines and India will potentially include joint eSports marketing efforts, production and distribution of eSports content through the Singtel Group’s platforms, telco data bundle plans and online and offline payment services through direct carrier billing and telco wallets. This is an extension of ONE Championship’s ongoing collaboration with the Singtel Group in mixed martial arts events.

Arthur Lang, CEO International of Singtel, said, “We have had a great partnership with ONE Championship since the joint launch of its app in May this year and other marketing collaborations across our regional footprint. We are pleased to take this collaboration into eSports. With the success of our PVP Esports Championship in October, we look to further engage with the gaming community through this partnership and increase our involvement in eSports.”